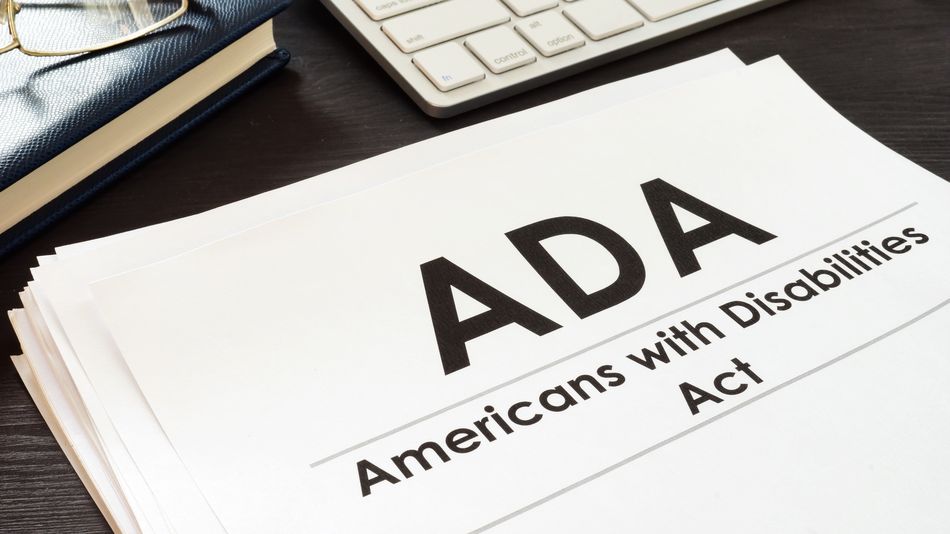 It may seem that people with disabilities have made a lot of progress accessing the same resources as people without disabilities. But there’s always more ground to cover. Right now there’s an important battle playing out online and in the courts IRL, where many businesses are questioning whether they have to make their websites and mobile apps accessible — and disabilities rights advocates are vehemently insisting they do.

Recently, the Supreme Court passed on reviewing a case from Domino’s, in which the pizza chain argued that the Americans with Disabilities Act, which protects individuals with disabilities against discrimination, doesn’t apply to online spaces. This all started back in 2016 when a blind man, Guillermo Robles, sued Domino’s when he couldn’t order food on their website and mobile app using a screen reader, an assistive device that helps people who are blind read text online. Domino’s site, Robles alleged, was incompatible with the device.

The ADA’s Title III is a federal civil rights law; it says that public accommodations (businesses in most cases) are required to provide effective communication with the people it serves. Effective communication isn’t happening, some disabilities rights advocates argue, when someone who is blind is blocked from a business’ services because they can’t use its website and mobile app. The problem — or the loophole for the businesses trying to fight it — is one about the law’s vagueness.

“There’s no direct mandate in the ADA or its regulations that says, ‘you must make your website accessible and here is what an accessible website is,'” Minh Vu, a partner with Seyfarth Shaw who defends businesses against ADA Title III lawsuits, says. In fact, Domino’s referenced Title III when they approached the Supreme Court with their case, questioning whether it requires businesses’ websites and mobile apps to comply with the ADA’s accessibility requirements for people with disabilities.

But Christina Brandt-Young, managing attorney with the nonprofit Disability Rights Advocates (DRA), which represents people with disabilities both in class-action lawsuits and systemic litigation, thinks otherwise. “Companies are fighting this [ADA’s Title III], not because they think the law isn’t clear but just because they don’t want to comply with it,” she says, adding that the ADA was crafted to be open enough to include websites and apps.

“The point of a law is to draft it flexibly so that it can apply to every situation you need it to, and there’s no question that the drafters intended the ADA to apply to communication,” says Brandt-Young.

Currently, there aren’t any explicit federal regulations mandating businesses to make their websites and mobile apps accessible. But the fact that the Supreme Court declined to hear the case means the lower court’s decision — which stated that customers should be able to access Domino’s website and app — remains in place.

While disability rights advocates applauded this decision, saying the ADA was written to be interpreted in this manner, Domino’s wasn’t so happy. “Creating a nation-wide standard will eliminate the tsunami of website accessibility litigation that has been filed by plaintiffs’ lawyers exploiting the absence of a standard for their own benefit, and chart a common path for both businesses and non-profit institutions to follow in meeting the accessibility needs of the disabled community,” Domino’s said in an online statement.

A barrage of lawsuits

Domino’s isn’t the only company grappling with these questions. The number of federal website accessibility lawsuits went from 814 in 2017 to at least 2,258 in 2018, according to the law firm Seyfarth Shaw, which has a team dedicated to defending businesses against ADA Title III lawsuits.

Like the Domino’s case, people who are blind accused Five Guys’ and Blick’s of having inaccessible websites.

“It’s really quite, in my view, unfair for businesses to be hit with all these lawsuits when nobody told them, ‘Yes, your website has to be accessible and here are the standards for what an accessible website is,’ ” says Vu.

Why is this so confusing?

Some people, like Vu, think the confusion with the ADA lies in the fact that the law was passed in 1990, when the World Wide Web was only about a year old. That means there’s no specific language in the ADA about website and app accessibility.

“The text of the ADA Title III is broad and flexible … if you offer a service like a website to your customers, you have to offer it to all your customers,” Brandt-Young wrote in an email.

But Sharron Rush, executive director of the nonprofit Knowbility, which works to improve technology access for people with disabilities globally, thinks the question about whether businesses have to make their technology accessible is moot. “We have to create accessible technology because of the way our entire society is now centered around [technology and the web],” Rush says.

Brandt-Young says businesses can look to the first web content accessibility guidelines (WCAG) issued in 1999 and updated in 2018. These state that accessible websites should have assistive-technology friendly text alternatives — which substitute graphics such as pictures and charts with text so people who are blind can understand the information — video captions, and sign language for prerecorded audio. These standards were published by the World Wide Web Consortium (W3C), the organization that sets the international standards for the internet. The 2018 WCAG guidelines include a long list of accessible features businesses can incorporate into their online technologies so people with disabilities can access them.

These are widely accepted international standards for what a website has to do to be accessible, says Kenneth Shiotani, senior staff attorney at the National Disability Rights Network, a disability legal advocacy organization set up by Congress.

While Vu also advises her clients to use the WCAG if they want to make their websites and apps accessible, she does explain that businesses aren’t legally obligated to follow these guidelines. She also feels it’s not an easy standard to meet because it’s filled with technical language.

How businesses can help

Both Rush and Vu have suggestions for how businesses can make their websites and apps accessible.

All websites and apps should have keyboard access so people do not have to rely on mouses to navigate, Rush says.

Businesses need to pay attention to color contrast, too. For example, pale gray letters on a white background are hard to read, Rush says.

Vu says videos should have both closed captioning and audio descriptions.

For websites, Vu recommends that companies prioritize the most visited parts of their websites by making them accessible to screen reader users.

The need for standards

The Department of Justice has never included the WCAG in its Title III regulations. But they are tasked with writing regulations for implementing Title III, which businesses have to follow to make sure they aren’t discriminating against people with disabilities. The DOJ can file “lawsuits in federal court to enforce the ADA.” In 2010, the DOJ considered creating website accessibility rules but reneged in 2017.

“It would have been simpler if DOJ had said, ‘OK, look WCAG is the standard,” Vu says. Vu worked for the DOJ from 2001 to 2003, overseeing enforcement of the ADA.

As to why the DOJ has never adopted any ADA Title III web accessibility standards, Vu says she doesn’t know. But she’s heard a rumor.

During the Obama presidency, Vu says she heard talk that there was pressure on the DOJ from Silicon Valley not to adopt web accessibility standards. If true, Vu thinks this is because this would limit the software tech companies could release.

True or not, businesses don’t have to wait for the DOJ to do something.

“What the courts have essentially said is there’s no need to wait for DOJ standards in terms of the full and equal access to technology, including websites … [however], it would be great if the DOJ would issue standards,” Seaborn says.

Fixes could be costly, but inaction costs more

For businesses that want to make their websites accessible for people with disabilities, it can cost hundreds of thousands of dollars to potentially millions of dollars, Vu says.

If that range seems high to you, you’re not the only one.

It can cost thousands of dollars for businesses to make their websites accessible, Dmitri Belser, executive director of the Center for Accessible Technology (CforAT), a nonprofit that consults with businesses on accessible web design, wrote in an email.

But Belser says, of the businesses CforAT has worked with — including nonprofits, small businesses, and larger companies like Macy’s and JCPenney — no one has ever spent a million doing this. It’s usually about $5,000 to $15,000. At the end of the day, businesses will save money if they include accessibility in the website on day one, Belser wrote in an email.

Putting aside disputes about the specific price tag, businesses need to update their websites constantly, so the cost is ongoing, Vu says.

“I’m not saying this is why we shouldn’t be doing it, I understand that accessibility means there is going to be an additional cost for every business on a permanent basis,” Vu says. “Until the language of accessibility becomes the standard for every website developer out there, it’s going to cost a lot more money.”

Rush, for her part, disagrees, pointing to the W3C’s “Business Case for Accessible Design” report, which she edited. It looks at the benefits, both financial and otherwise, Fortune 100 companies have enjoyed when including accessible design in their technologies. The report found that inaction can actually cost more. Target learned this lesson when it shelled out millions of dollars in a settlement over claims that its website was inaccessible. After all that, Target still had to make its website accessible. Coincidentally, the DRA represented the plaintiffs.

Despite the business consideration, “inclusion is where the future is going and so we need to incorporate those costs … to quibble about costs seems so anti-future,” Rush says.

The DRA, for its part, believes that improving website and app accessibility both increases revenue for businesses while also encouraging independence for people with disabilities.