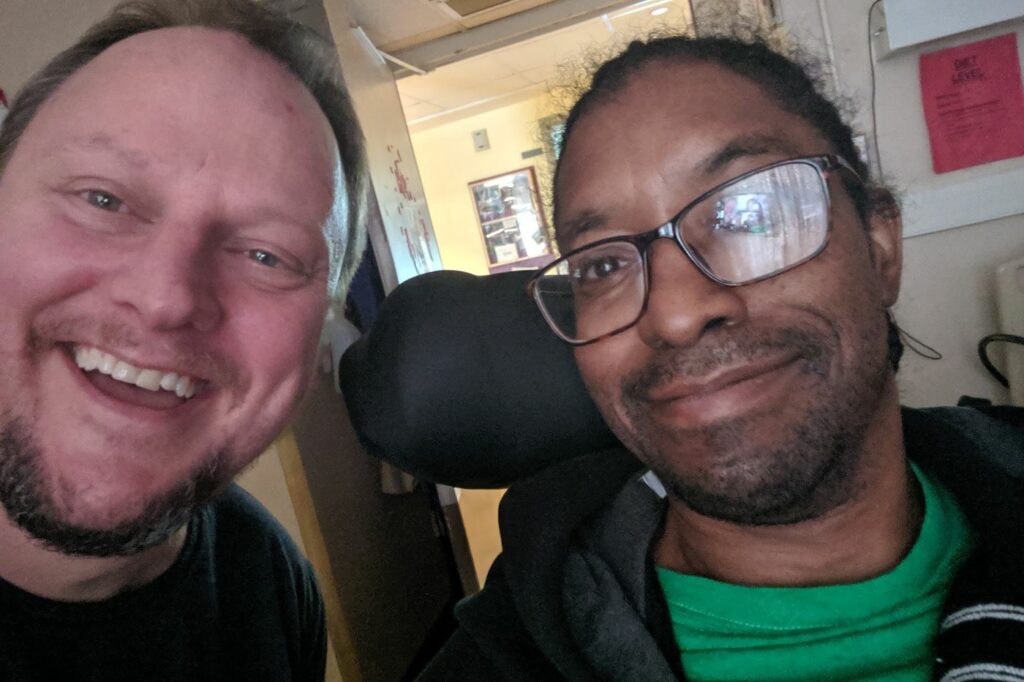 Uber is now offering helicopter rides, which is awesome. But that wasn’t much comfort while I spent the night in a parking lot with a friend who uses a wheelchair and our Uber never showed up.

Uber has opened up possibilities for creative problem solvers worldwide. It’s shown that digital services can go beyond offering convenience and entertainment to improve quality of life — in the real world, where pain, injustice, and annoyance run amok.

The first time I realized this was when my friend Tom told me The Pixies were coming to town a few months ago. Since his accident all we had done was visit at his living facility, a sort of hospital setting for people with debilitating injuries. Tom has been paralyzed since breaking his neck in a fall at work. He was a professional tree climber.

I asked Tom how we would get to the concert. I was thinking it would be some kind of service offered by Inglis House, the facility where he now lives. But he said we could just use Uber WAV.

WAV stands for Wheelchair Accessible Vehicle. It allows users of the app to order wheelchair vans the same way we might order Escalades. When the night of the concert came I opened the app, scrolled to WAV vehicles, and pressed a button. A nice young man in an old and rickety van arrived a few minutes later and took us to the concert.

The music was amazing and from that day on I did two things: I went to any concert Tom recommended, and I told everyone I knew about Uber WAV.

The one drawback was the quality of the rides. It wasn’t something Tom would complain about because Tom never complains. But the rides look and feel like they were pulled out of the junkyard and patched up for service.

The drivers are always nice. They tend to be hard-working and do a good job. But there are still issues. For example, the height of the van. Sometimes drivers accidentally bang Tom’s head against the top of the van while trying to steer the wheelchair inside. They are focused on aligning the wheels, and a few times Tom has had to speak up because his head was wedged into the ceiling. Temperature control is another problem. Tom’s body is unable to regulate its temperature, which makes him susceptible to the cold. But for the most part we overlook these inconveniences and focus on the fact that we get to be out, watching amazing music. This makes it all worthwhile.

So when Tom told me The Whiskeyhickon Boys were playing at The Rib House in July, I was in. I’d never heard of them, but if Tom recommends, it’s always a good time. We spent the night rocking with some of the most unusual and fun music I’ve ever heard. Tom was grinning wide at the end of the night when I logged onto the app and ordered the Uber WAV back home.

A driver took the fare almost immediately and we hung by the bar, chatting with a couple members of the band. After a while we made our way to the parking lot to meet our ride. But after waiting ten minutes, I saw the driver was no closer to picking us up. A short time later I tried calling him. He answered and then hung up. Then he cancelled. That happens once in a while, I guess. So I ordered another. Same thing happened.

Then it happened again. And again. So began a very long and inconvenient night.

Over the course of the next seven hours I would order dozens of rides. I kept staring at the phone waiting. Panic set in. I soon realized we didn’t have more options.

With the bar closed and Tom and I sitting in the parking lot I frantically thought about what to do. I searched for wheelchair accessible rides. I called every cab company I could find. After a few hours a cop showed up to see what we were doing. He talked to dispatch to see if there were any options. There weren’t. He left.

No ride ever showed. Even worse, multiple drivers accepted the fare and then just never arrived. They did not answer phone calls or texts. This didn’t just happen once or twice. It happened over and over and over.

I thought maybe drivers would start showing up at 5am. Then I thought maybe 6am. Nope. 7am? Nope. Finally, at 8am I found a ride. Not from Uber WAV — from Inglis House. They arranged for one of their vans. After a bit more waiting, the night was over.

Things could have gone much worse. It struck me that people who rely on this service are more vulnerable than most groups trying to get home after a night out. Offering helicopter rides sounds amazing, but it seems to me there are still bugs to work out with Uber WAV.

Jason McKee is a co-founder of Accessibility Shield, a software company dedicated to making the Web accessible to everyone.