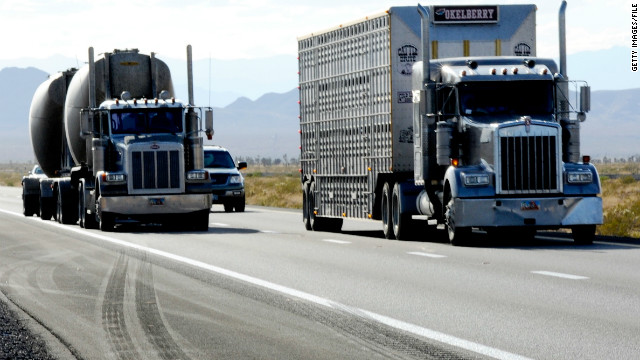 (CNN) — The need for commercial drivers has skyrocketed amid America’s rapidly changing economy, where giants of shipping and delivery services are already bowing under the weight of at least 42 states’ Covid-19-related stay-at-home orders. Businesses like Amazon, Walmart and Instacart are hiring hundreds of thousands of temporary workers, while shipping companies like UPS and FedEx suspended their service guarantees indefinitely due to increased volume and worker shortage.

But despite being employed in an essential line of work, some deaf and hard-of-hearing drivers fear their jobs are at risk as they await a crucial ruling from the Federal Motor Carrier Safety Administration (FMCSA) about whether hearing tests are a valid requirement for a commercial driver’s license.

Comments closed in February on a petition filed by the National Association for the Deaf (NAD) arguing that the hearing tests are discriminatory. Now proponents of the petition worry that FMCSA, a subset of the Department of Transportation, will try to throw out the petition while the nation’s attentions are fixed on the current crisis. Several NAD members I interviewed have been working with the FMCSA and cited a history of FMCSA’s negative language regarding the pilot program and ableist comments by those involved in the industry posted in response to the petition among other factors as reasons for concern.

In reality, a study by the American Trucking Association suggests that the nation was experiencing a serious shortage of commercial truck drivers even before the arrival of Covid-19, one that estimates suggest could leave over 160,000 unfilled positions over the next decade. With a lack of qualified individuals in the field, it seems reasonable to remove unnecessary barriers to entry; nevertheless, deaf drivers continue to experience pushback in their fight for equal opportunity.

Deaf people often face questions about whether they are allowed to drive. Thanks to the advocacy work of the NAD in the 1920s, early bans were overturned and deaf and hard-of-hearing people are allowed to obtain noncommercial licenses in all 50 US states. Studies have shown that deaf drivers are as safe as their hearing counterparts, and may even have some advantages behind the wheel, like fewer distractions and increased peripheral vision.

Yet, until recently, deaf workers were consistently barred from the commercial driving sphere. In 2006, a federal court upheld the decision that UPS could no longer prevent deaf drivers from applying. Meanwhile, FMCSA continued to maintain its hearing requirement until a 2012 pilot program began issuing waivers for the hearing test. According to Howard Rosenblum, CEO and director of legal services for the NAD, over 600 waivers and renewals were procured via the program. Though the process can be arduous, he said in an email pointing to the pilot’s success, the NAD’s current petition seeks a permanent repeal of the hearing requirement.

“Exemptions are not a long-term solution,” said Zainab Alkebsi, the NAD’s policy counsel, in an email, because “the experience is not equivalent to those of other CDL truckers.” Deaf drivers must wait months to receive an exemption, and, since the waivers cover only a two-year period, they have to keep reapplying — their licenses could be revoked if FMCSA rules to keep the hearing test.

The red tape is both unfair and unnecessary. “The exemptions were intended as a pilot to determine whether deaf and hard-of-hearing people who use the CDLs to drive trucks could do so safely,” Alkebsi said. “And the results have borne out that they are indeed safe drivers.”

Still, opponents of the hearing requirement repeal continue to argue “safety issues,” though the concerns appear to have no scientific backing. Deaf commercial driver and secretary of the Deaf Truckers Union Suzie Helgerson, who found herself drawn to driving rigs as a way to support her family and fulfill a love of traveling, told me in an interview that pre-trip inspections and new technology like light-up indicators help ensure safe operations, while Alkebsi noted everything from notepads and whiteboards to flashing alerts and preprogrammed GPS routes can facilitate safe training.

Helgerson said the Deaf Trucker’s Union will continue to advocate for a repeal of the hearing requirement. Remembering a conversation she once had with a hearing driver about how noisy it was in the cab of his truck, she said the union’s work is not just on behalf of today’s drivers, but for those who may lose their hearing in the future. “Our motto is it’s all about the skills, not the hearing,” said Helgerson.

With the passage of the Americans with Disabilities Act 30 years ago, the government made it their duty to protect the rights of disabled workers, but FMCSA’s failure to repeal their hearing requirement perpetuates the inequity it’s supposed to eschew. Rather than reinforcing old, ableist statutes to assuage corporations, it’s time for the federal government to obey its own anti-discriminatory policy, particularly in a time when deaf workers remain ready and willing to put their lives on the front lines of an increasingly essential industry.